Formed by the Stories of Baltimore

Formed to address inner city poverty, Open Door America appeared on the scene in 2005 just as major funding for blighted communities was disappearing across the nation.  In the wake of 9/11 and heightened security concerns, America was in double-time retreat from its contentious 40-year war on poverty.  No longer were leaders convinced of the nation’s capacity to alter a poverty landscape only marginally-improved since the big push began in the 1960s.  No longer were rank-and-file voters attentive to urban decay and its companion social ills.  Crime was down, the jails were filled, and in blunt terms poverty had successfully been quarantined to the tenements and trailer parks of a forgotten America.  For most, poverty in the new millennium was an abstract concept seldom covered in the news and rarely mentioned by office seekers.  Providing convenient political cover was a widely-held but majorly-flawed view that declining welfare rolls following 1996 welfare reform also meant a decline in poverty.  In truth, the more Washington attempted to rein in welfare spending, the more poverty grew.  Even as the monthly caseload of welfare families shrank from 4.7 million in 1996 to 1.7 million in 2014, the number of people living in poverty increased by nearly 12 million.  For many Americans, the first decade of the 21st century was a time of gnawing uncertainty about public spending on poverty programs.  Growing disinterest and widespread disinformation eventually turned citizen anxiety into voter apathy.  Into this fray stepped Open Door America.

After exploratory visits to a dozen renowned poverty centers from New York to Dallas, Open Door America adopted the seemingly prudent strategy of not reinventing wheels or tilting at windmills.  Time was of the essence and dollars were in short supply so why waste either taking ground already captured?  If it worked in Gary, Indiana, why would it not work in Charm City?  If a diverse faith community could build a poverty colossus in Arlington, Texas, how hard could it be to get a cross-section of Maryland’s religious leaders to band together around Baltimore’s chronic 25% poverty rate?   If creating green zones in west Chicago helped reduce gun violence, how long could it take to raze even 10% of Baltimore’s 16,000 vacant houses to help shrink a vast open air drug market?   Eleven years later, we know the answers to these questions, but more importantly, we now know we asked the wrong questions.

In examining the national marketplace, we began to see how local history and culture in cities like Baltimore play a pivotal role in shaping a region’s awareness of its poverty legacy.  Setting up shop in one of America’s most racially-divided and economically-segregated cities, we fast understood that wounds from the past were present in nearly every poverty debate and strategy session.   If finger-pointing and shoulder-shrugging were Olympic sports, Baltimore in 2005 would have been a gold medalist.  The thriving, progressive Baltimore known for great universities and art galleries, nationally-ranked hospitals, and a gleaming Inner Harbor, was counter-weighted by 150,000 poor people (nearly all African-American) living a nightmare on the west and east sides of town.  In our efforts to probe this dissonant relationship, time and again we encountered a fractious racial atmosphere keeping clergy from praying together, politicians from working together, and an apprehensive business community from owning the desperate employment needs of a quarter of the city.  In hundreds of private discussions with people from all walks of life, the racial divide was readily acknowledged as the city’s dominant disease.  Publically, however, the topic was habitually swept under the rug except for those rare occasions when a civic leader was willing to risk the favor of the downtown power centers.  From our street-level work with over 900 poor families on Fayette Street and Milton Avenue, we came to see that old-fashioned racial stereotyping stubbornly dogged our clients’ daily interactions with the social services, criminal justice, and educational systems.  Though many in Baltimore still prefer to deny these inconvenient truths, the city’s historic fixation with skin color and class distinctions continues to undermine its potential for coordinated action and sustainable change.

From the outset, we sought to draw on the conventional wisdom echoing in the public square.  Our 12-city road trip fed this strategy and our early funders reinforced it.  All agreed there was little to be gained by attempting to be original.  We quickly adopted this working thesis:  If poverty was as old as time and America was indeed a can-do nation of wise and compassionate people, then successful poverty remedies must be readily available in many forms from many sources.  All we had to do was identify the right remedies and match them to east Baltimore with vigor and commitment.  Simple.  So we thought!

Fourteen years ago, conventional wisdom looked something like this:  Poverty is a permanent condition of American life.

With generous seed money and scores of volunteers from The Church at Covenant Park in Ellicott City, Maryland, we launched ourselves into the middle of the poverty fight in 2005-2006.   In running a daily after-school program for a hundred elementary school children, we built on the R&D of national experts, tapped into the magic of mentor-to-child relationships, and experienced nearly instantaneous success in meeting our core objectives.  Positive energy, strong participation, and accelerated learning were the hallmarks of our after-school.  School administrators were pleased, teachers were ecstatic, and the Covenant volunteers were enthralled.  At a unit cost of less than $1,000 per child, we were also $500 below the industry norm of $1,500.  We were learning big lessons about the economic power of highly-motivated volunteers.  We were seeing how the plight of children in trouble inspired Americans from all walks of life.  One thing was missing:  the parents.  How could we help the moms and dads of the kids everyone wanted to help?  Could we create an organization with the right deoxyribonucleic acid to enhance the growth, development, and functioning of embattled American families?  Could we build a path to and for the parents? 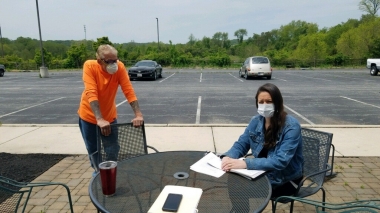